Are you ready to get a little witchy? Good, because I’m already gearing up toward Halloween with this little number called Spell on Wheels.

I had first mentioned this comic last October in my 5 Comics to Get You in the Halloween Spirit post, and I had hoped to make a spin off of sorts shortly after that about this particular comic. Well, it’s 8 months later, so better late than never I suppose?

Anyway, let’s get into this spoopy tale!

Spell on Wheels is a cute series by Kate Leth, Megan Levens, and Marissa Louise that focuses on three young women who are witches. The main characters—Claire, Jolene, and Andy—rush home to discover than many of their prized possessions used for spellwork have been stolen. Unable to use their magical talents to locate the culprit, the three set off on a road trip to track down their items after they pop up on a magical online marketplace. On their travels, they run into some unique characters who help them along their journey in one way or another. But there is some dark magic at work, and the three witches need to tread lightly to avoid irreparable dangers. 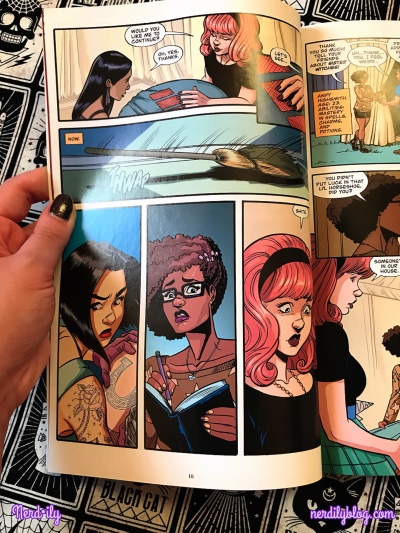 Overall, the story is quite adorable. There are lots of great Girl Power themes and imagery, a wonderfully diverse cast of characters, and some good witchy *a e s t h e t i c*. This would be a great book for a young adult reader who is getting more into comics/graphic novels, as it’s pretty much PG.

As you read along, you definitely believe these ladies are witches. You get wrapped up in their world, and you definitely root for them. I know I felt like I was ready to get a cauldron out and start practicing after I got a few chapters in. And I love our three protagonists, who are fully fleshed-out and have a great dynamic. I also enjoy that they are not your typical female protagonists, and there is some great diversity in that friend group.

I also love the secondary characters, and the “side quests”—if you will—that the three witches wind up in.

And, of course, the artwork: lots of vibrant pastels and near-Archie style illustrations make this a fun, comfortable world to dive into. It’s not invasive, and exceptionally pleasing to look at. Also, as a quick note, the fashion that is depicted in this book makes my little wannabe gothic heart flutter.

However, there are some minor hiccups I do want to address. The story up until the last chapter keeps you guessing. As the reader, you are led to wonder who the actual perpetrator is of this incredible heist. The book becomes a page-turner after a while, and once you reach the climax, you’re ready to find out what exactly happened. While I will not spoil the ending here, I will say that it was definitely unexpected, and abrupt, and didn’t provide a great conclusion to the story that had been presented up until that point. Prior to the ending, the story was engaging and quaint, and the build up to the mystery of Whodunnit somewhat gets tossed to the side by a force that had not been previously mentioned (unless I missed something).

I think so! It’s a quick, easy read that’s certainly worth checking out, especially during Spooky Season, if you’re in need of a Halloweeny fix, or if you like witchy and spoopy things (like I do). I’m hoping that a continuation of this story will happen in the near future because I am curious to see what happens to Claire, Andy, and Jolene. But in the meantime, it’s time to move on to the next one! 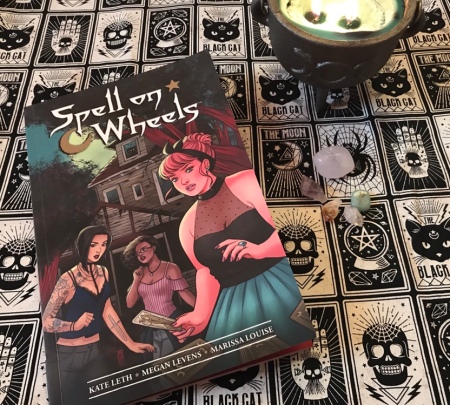 What do you think of Spell on Wheels? Do you think you’ll read it? Let me know in the comments so we can nerd out together! And don’t forget to check out my Beginner’s Guide to Comic Books, an extensive and ongoing series for people who want to become comic nerds! Also, take a look at my last comic review if you want to add 100% more corgis in your life.