Today, we celebrate the 25th anniversary of Jurassic Park! Can you believe that this much time has flown by? I remember being a wee babe watching the movie for the first time. I had already been a dino-obsessed kid at that point, and Jurassic Park completely captured my imagination. It was also a film that greatly inspired me to become a Paleontologist, even though I didn’t. Still, Jurassic Park holds a very special place in my heart, even more so than Star Trek–if you can believe that.

So today, I am celebrating my favorite movie with a super easy, super cheap craft: a dinosaur terrarium! Is this the most original idea ever? Probably not, but I thought this would be a fun thing to do, and show how accessible a DIY like this is because, believe it or not, everything I got was from the Dollar Store.

From Your Utility Belt, You’ll Need: 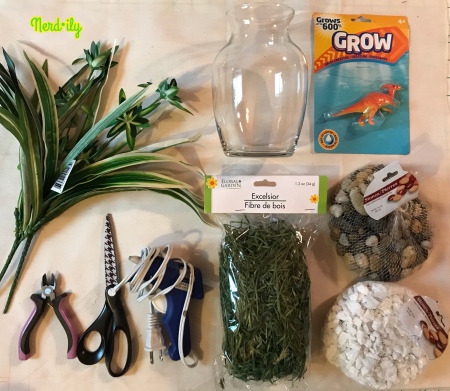 Get your glue gun up and running, because you’ll need it later! Open up your package of river rocks and add a layer to the bottom of the glass container. Don’t fill it up too much, because you’ll want to have enough room for the greenery and the dinosaur!

Take your raffia, moss, or excelsior (???)–your grass-type stuff–and add a layer on top of the river rocks.

Cut off leaves and sprigs off of your greenery floral pick to create a jungle atmosphere. You can cut these leaves to look more jagged, or more like ferns. Take your hot glue gun, and anchor it to the grass layer. Add as much or as little as you want.

Take your dinosaur and add some hot glue to it’s feet, and position it anywhere on the grass layer. I chose a Parasaurolophus figure. 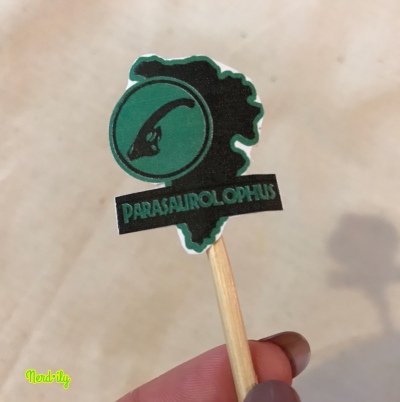 Print off a small Jurassic Park sign that coordinates with the dinosaur you features, and cut it out. Cut off a section of a bamboo skewer–or grab a toothpick–and glue it to the back of the sign. Once dry, add some glue to the bottom of the stick, and place it somewhere in your terrarium

Now show off your handy work!

In total, this DIY cost me around $7 for materials. Not bad! And it took around an hour to complete, and its incredible cute! Display it on your end table as you sit back and enjoy Jurassic Park (and Jeff Goldblum in all his glory).

Let me know your favorite dinosaur, or your favorite Jurassic Park moment in the comments down below! I hope you enjoyed, and I’ll see you for the next one!

For more nerdy crafts, check out 5 easy sewing projects you can make nerdy and this super easy and kid-friendly Lightsaber tutorial!

Life was mean to be lived nerdily, so what are you waiting for?