With October finally here, it’s time to pull out all of the spooky goodies to really get you in the spirit. Whether it’s decorations, candy, clothing, or your favorite movies, there’s something that helps you harken back to those wonderful Halloween feels. If you’re a fan of reading comic books, then you’re probably on the hunt for some reading material to evoke those spooky vibes. Luckily, though, the comic world has a wealth of comics that are either Halloween-themed or have spooky themes.

Below are my top 5 favorite comics that are perfect for Halloween, and are sure to get you in the mood. Even if you’re into the Halloween theme year-round (like I am), then these titles are right up your alley! 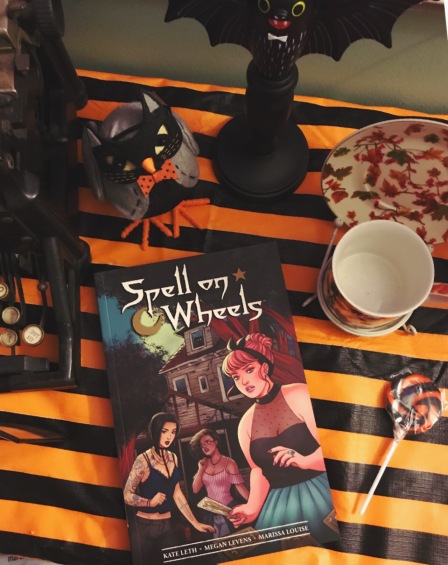 Spell on Wheels was released late last year, but when I picked up Issue #1 recently, I fell in love with the story, and went ahead and bought the trade*. The comic follows three witches who are best friends and roommates. When their house is ransacked, and their precious magical possessions are stolen, the trio set out on a road trip to hunt down their lost items–and the perpetrator of this crime. Taking place along the upper East Coast during autumn, this comic will give you all the fall feels, and make you wish that you’re a witch, too.

*Check out my full review of Spell on Wheels here

Written as “scary stories for kids,” the Spook House series brings together various writers and artists to bring short vignettes of fright into small comic collections. Ranging in titles from “The Creature from Granny’s Pond” to “I Was a Grade School Mummy,” the stories are funny, entertaining, and provide the right amount of innocent spook for the season.

For something on the creepier side, definitely check outWytches. Written by acclaimed comic author Scott Snyder, the story is about the unknown creatures of the woods who haunt the small town. When 13-year-old Sailor Rooks and her parents move to Litchfield, NH, to get away from a traumatic past event, her and her father soon realize that this sleepy little town isn’t as quiet as it seems. By putting a new spin on the classic lore of witches, this comic is sure to add that element of horror to your Read Pile.

Though not entirely Halloween-themed (leaning more on the sci-fi side), Paper Girls is still a fantastic read for autumn. Originally taking place on the morning after Halloween, four girls set out to deliver the daily paper. But when odd things start happening, Erin, Mack, KJ, and Tiffany get unwillingly involved in a bizarre, otherworldly phenomenon. There are currently three trades out of this series, so if you’re looking to hunker down on a cool, autumn night, then I highly suggest picking these up and getting cozy. 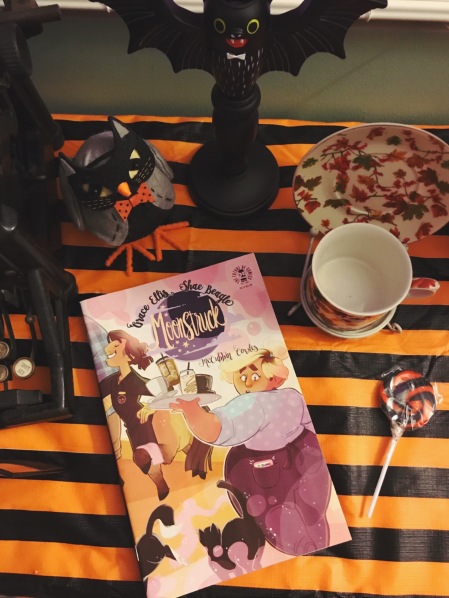 If you’re more into a light-hearted adventure for Halloween, then the adorable Moonstruck is perfect for you. Written by the creator of Lumberjanes, Moonstruck is perfect for anyone who’s a fan of Halloweentown. The story takes place in a small town where mythological and magical beings live side-by-side with humans, and there’s definitely magic in the air. Our protagonist, Julie, works as a barista in this town, alongside her centaur friend, Chet. Julie, however, is haunted by a secret she keeps out of the public eye: the fact that she’s a fluffy werewolf. And, while this all may seem normal in a town of boys and ghouls, there’s something dark lurking around the corner. For a quick, cute read, Moonstruck is a go-to for that year-round Halloween vibe.

What are you reading this Halloween season? What comics are now on your Pull List? Let me know, and let’s get spoopy together! For more comic-related content, be sure to take a look at my ongoing series, The Beginner’s Guide to Comic Books, and check out Part 2 in this series of Halloween-themed comics!

Hopefully you all have a wonderful Friday the 13th! Stay away from camps, but make sure to pet black cats.

Life as meant to be lived nerdily, so what are you waiting for?