We arrived right after the Faire had opened, so the weather was a little more bearable than it has been here in the Midwest. Right away, we noticed that the whole “Celtic Weekend” thing was a little less present than, say, “Pirate Weekend.” Yes, there was a fair share of men in kilts, and even a band called The Tartan Terrors, but the impression that the Faire was Celtic was lost to us. But still, we were excited to go see all of our usual shows and stops, starting with a magic show. 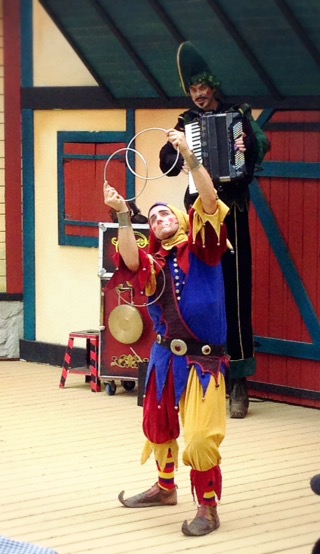 Our main mission on this day was to consume all of the food available. There’s your standard Renaissance-themed noms, like a whole turkey leg and beef stew, but there’s also gelato, iced cappuccino, and God’s gift to the world: cheese fritters.

After consuming our weight in food, we decided to walk around some more and take in the sights of the Faire. One such sight is the infamous Mud Show, which we saw a few years prior. It’s for a more mature audience, and things get awkwardly raunchy. Also, there’s mud involved. We watched for a bit, and then moved on to to see the whip performer, Adam Crack. (I honestly don’t know what other professional title to address him by than “whip performer.”) If you follow me on Instagram, then perhaps you saw my story about the performance over the weekend. The show was amusing, as usual, and then we headed towards the back of the Faire grounds to be closer to the jousting arena.

Each year, we also take part in the tradition of embarrassing ourselves at the archery range. For $7, my friend and I got 12 arrows to shoot into hay bales. She got a few into the center of the target; I got one into the uppermost corner. Lots went directly into the ground. Hey, at least I’m consistent.

We perused the armor and weapons displays, then it was time for the final joust of the day: Joust to the Death!

This is our favorite jousting show to see, not because there’s bad fake blood being spilt, but because it’s entertaining on so many levels. First, there’s the costumes the knights and squires wear, which are always so cool. Then there’s the guy who sells pennants, who reminds us so much of Chris Farley (he’s the best part, honestly). Finally, there’s the show itself, with its staged battles and melodrama. It’s all so wonderful. I love it each and every time.

While this year’s Renaissance Faire wasn’t quite what we expected in terms of its theme, we still enjoyed ourselves nonetheless. And yes, we will be going back for sure. If you’re totally hooked on the Renaissance Faire, like I am, then I suggest checking out your local Faire. Never been? Take a look at my handy-dandy guide to help you out! Let me know if you’ve gone already, or you’re planning on going, and we can nerd out in the comments below!