It’s officially February, which means that we are a month and a half away from C2E2! In the meantime, I’ve been keeping myself busy by working on multiple projects—one of which is my cosplay.

If you’ve been around here for a while, you’ll know that I’m bonkers for Star Trek: The Next Generation. In an effort to find a somewhat simple cosplay, I decided to portray a gender-bent version of my favorite TNG character: Lt. Commander Data. 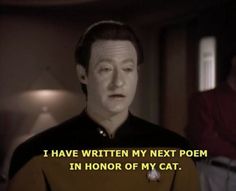 I adore Data. First of all, he loves cats. Second, he’s quirky and awkward as hell. Finally, he’s endearing. How can you not love the android? In some strange way, I identify with Data, so I figured that dressing like him would be a ton of fun.

So, how am I preparing for such a cosplay? Well, you’ve got to have the uniform. No, I didn’t make it (though I wish I did), but I got it for a great price. Can I get a “hallelujah” for Amazon??

Next, I found a great base make-up to accomplish Data’s luminescent look. Before I broke down and bought a cake make-up, though, I tried to make one myself. I have yet to find a successful face paint recipe, hence the store-bought option.

The final frontier for this cosplay will be something I’ve never done before with: character contacts lenses. I generally stay away from cosplay a that involve such an item because of my need to, you know, see. Prescription character lenses are also a little more expensive, which is why I’ve been wary to try them. But, this is the year, and I’m gettin’ me some character contacts.

While it might not be the most exciting cosplay, I am still pumped. I think this year my friends and I are going to try out C2E2’s speed dating event, which I hope is entertaining. And, I mean, speed dating in cosplay sounds entertaining enough. We’ll see!

Are you going to any conventions this year? Will you cosplay? Let me know!

Life was meant to be lived nerdily, do what are you waiting for?