Here we are: the week of Halloween. Can you believe it? Well, I have definitely saved the best for last, because this week we are celebrating the ultimate Halloween film: Hocus Pocus.

Since the movie takes place on Halloween night, I thought it was only appropriate to wait until this particular week. But Hocus Pocus doesn’t just take place during Halloween, its setting is someplace supremely magical. That’s right, I’m talking about Salem, Massachusetts.

At the very beginning of October, my family and I went on a trip to Boston. While we were there, we made a trip out to Salem, and spent the day there. Now, I’ve been to Salem before, but I was 12, and don’t remember much of the experience. I was thrilled to go back and create new–and hopefully lasting–memories. I wound up leaving incredibly surprised and absolutely delighted. 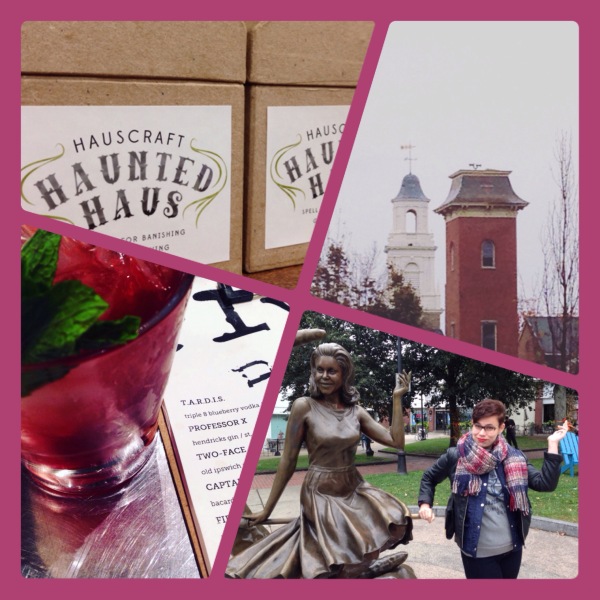 Besides the whole witch schtick, Salem is insanely cool and unabashedly nerdy. When my parents and I first got into town, we decided to grab a bite to eat at this place called The Flying Saucer Pizza Company. I know, it sounded a little hokey to me as well, but it was nerdvana. There were dozens of sci-fi pictures all over the walls, Next Generation on the TV, and some of the most delicious cocktails named after comic book characters. 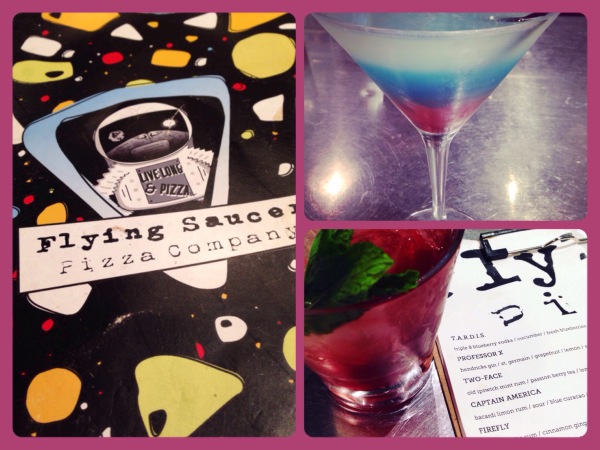 I tried two of their signature cocktails as I ate one of their Vulcan salads. The first one I tried was called the Two-Face, and it was remarkably pleasant. It came prepared like a Half & Half, but with passion fruit tea on one side, and mint rum on the other. The other cocktail I sampled was called the Captain America; after tasting it, I definitely understood the reference. Layered liquors and homemade grenadine resembled the iconic shield, yet when they all were combined, the concoction tasted like pure freedom, justice, and a Red Rocket popsicle. I’ve never drunk alcohol so early in the day, and I certainly don’t regret it.

After our meal, we signed up for a historic Salem walking tour. Two hours of slogging in the pouring rain led us through graveyards, old town squares, and other significant sites tied to the witch trials.

Before our tour ended, we stopped off at the doorsteps to Town Hall. Our tour guide discussed the historical significance of the building, then asked a completely unexpected question:

“Has anyone seen the movie Hocus Pocus?”

Casually, we find out that this town hall building is actually in the movie. It’s where the parents are for the Halloween party where Bette Midler sings “I’ll Put a Spell on You.” I about died.

When our tour ended, my parents and I went to a great restaurant called Murphey’s. Afterwards, we walked around, and saw a bit of trick-or-treating. As it turned out, we arrived in Salem on the day of the Mayor’s Holiday. This is where the children of Salem got to dress in costume and go trick-or-treating around to the different shops in town. There were such cute hobgoblins to see for sure!

We walked around to different cool shops, like HAUSWITCH and Pamplamouse, where I bought myself some amazing souvenirs (which will be featured in a post this week). Overall, it was an amazing day.

The best part about Salem is that it was full of Halloween spirit. I live out in the Midwest, and in my neck of the woods, Halloween isn’t a big deal. In New England, however, I saw the magic of the Halloween spirit. Visiting Salem made me realize the true meaning of the holiday, and allowed me to fully embrace my nerdiness. I’ll be spreading this Halloween magic all week long, leading up to the big day, and a special post on Friday! See you then!