Yes, you read that right; last night’s episode was the 100th episode of Face Off!

I couldn’t believe it either.

I have been watching Face Off since it first aired, which either makes me incredibly dedicated or incredibly sad. I’m going with incredibly dedicated for this one. But in all seriousness, this is a momentous occasion, indeed. To celebrate, the contestants paired up into teams of two once again to create a whimsical and macabre corpse couple a la Tim Burton. The couples would then be married on the show, with the ceremony officiated by McKenzie Westmore herself.

The teams were broken down into:

As far as the fabrication process goes, there was no drama. The teams got along great in this episode, and worked exceptionally well with one another. Ricky did get a little creative by deciding to add a beating heart into the design of the corpse groom, which turned out awesome. (Can I also just say that I thought it was absolutely perfect how the groom from the electrocuted couple was named Serge?!). But all in all, though, it was smooth sailing…

…until everyone got to the reveal stage, that is.

While the fabrication process was a fun, light-hearted look into how the contestants work together, the judging portion of the episode was an absolute bloodbath. Poor Jason & Missy–confident in their belief that they had created a great final look–were torn apart when they expressed their pride for their work. Their look was not awful by any stretch of the imagination, but the blame fell on Missy’s darkened paint job regardless. Meg & Nora were also brutalized in last night’s episode, after their concept of  a star-crossed artist and her drawing failed to paint a picture of macabre whimsy for the judges. See what I did there?

I’ll let myself out.

I genuinely felt bad for Meg & Nora, because their disappointment was so evident that hour before the reveal. Nora even expressed to the judges that there were some “short comings” with their final look. But none of those judges take pity or remorse, leading to one exceptionally painful ending.

And the winners are:

Their take on a crazy cat lovers’ rendition of Beauty and the Beast was the perfect balance of whimsical and macabre, making the judges gush over their look for much of the episode. But it was Jasmine who was this week’s winner, due to her skillful painting on the bride’s face, which Ve Neil couldn’t get enough of.

That’s the mystery: we don’t know yet! The episode ended with a celebration for all of the newlyweds, so we have to wait until next week to see who will be sent packing.

I don’t care what the judges say, I thought that Jason & Missy’s look was cute and quirky. What sold it for me was when the bride held up the groom’s head, making a vibrant kiss on his cheek visible to the audience. 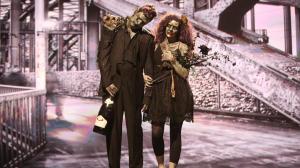 I also enjoyed Ben & Jasmine’s cat-tastic design. Being a crazy cat lady myself, I appreciated the neurotic attention to details.

Finally, Scott & Stevie’s look was adorable. I loved how their look was creepy (since the couple was supposed to be dead), but sweet and romantic. It truly reminded me of Corpse Bride mixed with a little A Christmas Carol.

Okay, I get it already, working in teams shows the judges how they play nicely with others. Now it’s the third episode, and we have no idea how the contestants stand up to an individual challenge. We don’t even know their individual talents, because each Spotlight Challenge has been centered on the work of the teams. I JUST WANT AN INDIVIDUAL CHALLENGE.

That being said, I have no clue who will be sent home. I was taken aback when the judges announced the bottom looks, so now it’s a free for all at this point. At this point, it seems as though Missy might be going home after all. This is the second week that she has fallen to the bottom looks spot, and she was warned in last week’s episode that her painting style was too dark. Watch out, Missy!

However, this is the second time that Ben’s team has won, so to me that signals a contender. I’ll be keeping my eye out for Ben in the next few episodes. For now, though, I will be waiting in sheer agony for next week’s episode, as per usual.