If you’ve been on the up and up with Syfy’s Face Off, you’ll know that last night’s episode determined the final three contestants. If you’re not aware of what Face Off is, then shame on you!

Face Off is a competition show on Syfy in which contestants duke it out through daunting make-up and special effects challenges. And yes, it’s as awesome as it sounds.

I’ve been watching Face Off on and off since it first premiered, and I’ve loved it ever since. On most reality competition shows, the contestants are either insufferable, mean, or play dirty. On Face Off, however, the artists have way more respect for one another, which makes for an even playing field for all. But don’t let the lack of cattiness fool you; there is plenty of drama and suspense. Once the contestants are given their Spotlight Challenge, they receive three days in the special effects lab. On the first day, the artists receive five hours to work; the next day, they get nine and a half hours; the third and final day, they have four hours in the lab with an additional one hour before the models showcase their looks. Now I know what you’re thinking: “This doesn’t seem so hard!” But when you watch the show, you soon realize how tough the challenges are. Not only are these artists sculpting a latex prosthetic and painting it, but they are also fabricating a costume, creating props, and encountering complications in about 20 hours. So yeah, the drama is real!

In this season, only three contestants remain: Emily, Darla, and Logan. Darla has been one of my favorites from the beginning, so I was thrilled when it was announced that she was moving on to the final three. I’ve also really liked Emily’s work; she’s is the personification of perseverance, and each week she has turned out some amazing work. Logan–though I’ve never been a fan of his–I do admire his spirit and tenacity, and he has produced some of my favorite looks. Just so you know what we’re up against, here are my favorite looks from each finalist: 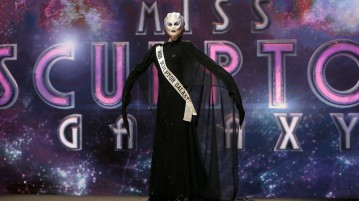 The season finale of Face Off will air next Tuesday at 9pm/8pm central on Syfy channel. Get excited, because Im so excited!!