It’s been years since I’ve watch anime consecutively, but there are a few things I remember distinctly:

If one anime encompassed all these qualities, it would definitely be Dragonball Z. Being a 90s kid, I was very much acquainted with this particular anime, and me and my friends would “play” Dragonball Z at school. Mainly, what this entailed was us screaming “KAMEHAMEHAN!” and pretending our hands produced lightening-like energy.

Dragonball Z was the first anime I remember watching on a consistent basis, but I was also a huge fan of Sailor Moon. When I went through my “anime phase,” I watched and read countless Japanese animations and manga. The weirder it was, the more I loved it.

Recently, I’ve been thinking a lot about anime. I would be lying if I said I didn’t miss certain shows or books, because it was such a big part of my life for a long time.

But I can’t help but think of how grandiose anime is, with its distinct art style and unique plotlines. Anime always seemed like a grand show in my eyes, with each episode more dramatic and colorful than the last.

Why is there so much shouting and unrealistic action in anime? Does the hair always have to be an unconventional color? And who designs these elaborate costumes for the characters to wear?

To me, anime is one big personification of dramaturgy, the idea that all the world’s a stage, pretty much. And stages don’t get any bigger than the media (books, television, movies, and the internet). So, for something completely different, I’m going to explore this notion of anime and dramaturgy, and try to get to the bottom of it.

Theory 1: Anime and manga hearken back to traditional Japanese theatre.

Japan has a long, rich history of theatre and performance. From kabuki, to noh (classical musical dramas), to bunraku (puppet theatre), the Japanese know what’s up when putting on a performance. The art of performing is in every culture, but the Japanese culture in particular seems to have mastered this art. So naturally, anime and manga can be considered as a great performance. Take a look at this kabuki actor: 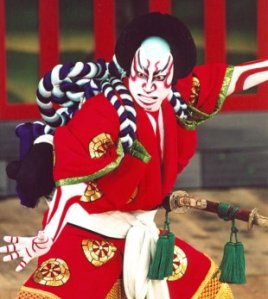 Notice anything in particular about how the actor is dressed? Now take a look at this character from a popular anime, called Bleach:

See any similarities? In both cases, they hearken back to traditional Japanese dress, but overly-exaggerated versions of it. The hair in both examples is very prominent, and the tattoos evoke a strong sense of power, dominance, and strength.

The same can be said for many of the female anime characters.

The majority of female characters in anime and manga are quite beautiful, with smooth skin, accentuated eyes, and great adornments in their hair and on their clothing. Gee, I think to myself with great wonder, what do these qualities remind me of in Japanese culture?

Not many people realize that geisha were a popular form of performance and entertainment in Feudal Japan, and their tradition still lives on to this day. Geisha are beautiful performers, who know a wide variety of talents and skills, and are dolled up to the maximum depending on their rank as a geisha, the occasion, or the season.

Many female characters in anime are very pretty, have a particular set of skills (much like Liam Neeson), and are dolled up—much like the male characters—with the odd fashion and hair that we see.

So really, when you think about it, anime characters are like the classical, traditional Japanese performers, but much more contemporary, with a major touch of fantasy. They are personifications of actors, as they enact out actions on a big stage, because they’re acting to entertain? Yeah, your mind’s blown.

Theory 2: Anime helps its creators break away from social conventions.

I’m gonna say it: anime characters yell a lot. For no reason…or for many reasons.

They also like to get into some shenanigans, whether or not these said shenanigans are good or bad. So anime characters, more often than not, find themselves in a lot of shit. And, a lot of times, anime characters are very opinionated, loud, and steadfast in their ways. They’re almost American, in a way.

You’d think with these many brash characteristics, the creators would be just as outgoing and flamboyant, until you looked up bios of their creators.

One of my favorite manga series to read was D. Gray-man, which is written by Katsura Hoshino. Back when I read them, the only insight into her life I received were the short, one-page anecdotes she made about her cat. That was it. Even now, if you look her up on Wikipedia, her biography is only three lines long. I’m not saying an author’s privacy is wrong, it’s just not heard of very frequently in our day and age.

Japanese people, characteristically, are very reserved and private. They have set customs and social cues, and they’re about as much of a polar opposite to Americans as a cheeseburger is to sushi (I’m so sorry for that example, but it really is true).

As it has been observed many times before, art is a great avenue for self-expression. Any art form allows for an artist’s voice to be heard, and what better avenue to express oneself than with anime?

Are a creator’s characters yelling as a battle cry, or a cry for attention? Are the characters exhibitionists because the creator has been shamed for many years from stepping outside of the box?

I can’t answer these questions, because I don’t know. It’s a theory, after all. When living in a society that values the resonance in silence, it kinda makes sense.*

With this in mind, the creators of these anime shows are performing a dramaturgy of their own, through the means of the characters and plots they have created. Isn’t art cool kids?

Theory 3: Anime has become HUGELY popular, and its popularity keeps on growing.

Anime shows are like stars: when one finally dies out after being on for years and years, a new series replaces the old one in popularity. (I know, it’s kind of a flawed metaphor, but work with me, here.) Shows like Naruto and Bleach are infamous for having many seasons, many story arcs, and many years on air. These anime have been going on long before I became a fan, and they are now beginning to “die out.” But Naruto and Bleach were hugely popular, commanding multiple movies, video games, books, costumes, and countless other items of merchandise. Anime is a big business, and as long as the fans like it, the show will continue.

Many creators are pressured to keep up with the demand for more episodes or more chapters when an anime has become particularly popular. The author and illustrator for Bleach, Tite Kubo, was so behind on publishing the next installment of the manga that its television adaptation had to stall for time by creating a highly irrelevant supplemental story arc just to buy Kubo some time.

This shows the power of fandoms: if they like something, they want it, and they want it FAST.

But Bleach and Naruto aren’t the only rodeos in this town; other hugely popular anime include Death Note, Fullmetal Alchemist, and the never-ending Inuyasha (which finally ended). Each of these various anime series have so much of a fan-base that any merchandise pretty much sells itself.

But, like I said, once one star dies, another is born. Recently, the smash-hit anime titled Attack on Titan has taken the world by storm. The show itself debuted in 2013, and since then, the show has skyrocketed into popularity.

For real, it’s almost impossible to go anywhere without seeing something from Attack on Titan. I’ve even heard people who have never watched anime before say that they like the show. It’s insane how big this anime has gotten.

In reality, popularity means money, and these new anime shows are huge cash cows for its creators, the publishing companies, and the production companies that create the television adaptations of the manga. And now with manga and anime more accessible than ever, anyone can experience it and get involved in the craze.

Online video streaming websites, such as Netflix, Hulu, and Crunchyroll (Netflix for anime), offer hundreds of titles in anime, and major bookstore chains have their own manga/anime sections in-store. Amazon, the largest online store, sells every kind of anime and manga you can think of. All the books are there, all the DVD sets are ready for purchase, and you can have it on your doorstep by Friday if you have Prime.

But what really sells the extent of a anime’s popularity is to what extent do people dress up as its characters. 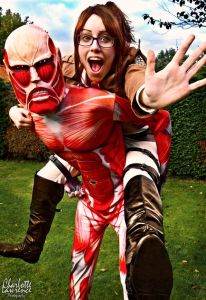 Of course, there are popular characters to dress up as, but when people consistently dress up as characters from Attack on Titan, you know that the anime carries significant weight. And, of course, if something’s big, it’s got to have a convention…or several…around the world. You know, no big deal.

Just the thought of how much of an impact anime has on its fans is astounding. Each piece of the fandom—from the merch, to the games, to the movies, and to the cosplay—is one vital part in the role of anime. It’s all a big show. Anime has its own subculture under the general canopy of geeky fandoms, it has a strong following, and it’s not going anywhere anytime soon. Just like Miley Cyrus; anime just keeps coming back with a larger, flashier display, which catches the attention of fans and casual observers alike. So, in a way, anime itself is performing, and as long as it has an audience, it will always be in the spotlight.

*Note: everyone is an individual, and these statements are made from known cultural norms. These cultural norms do not necessarily define a person for who he or she is.